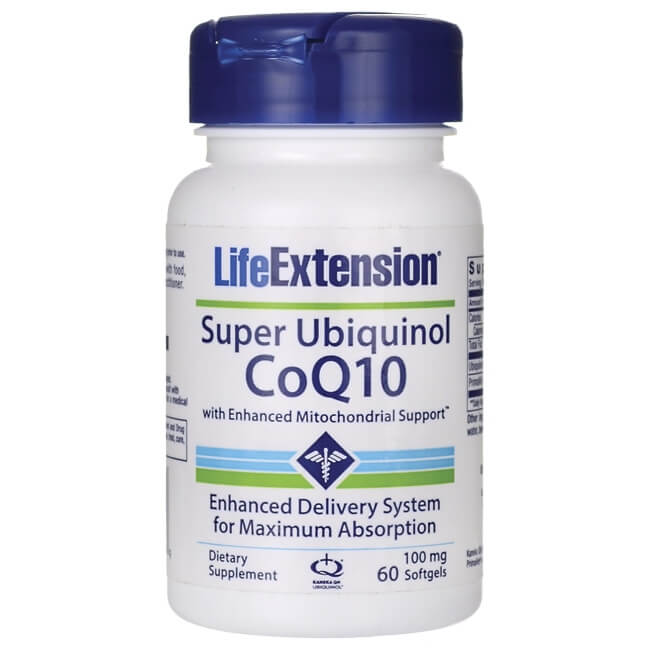 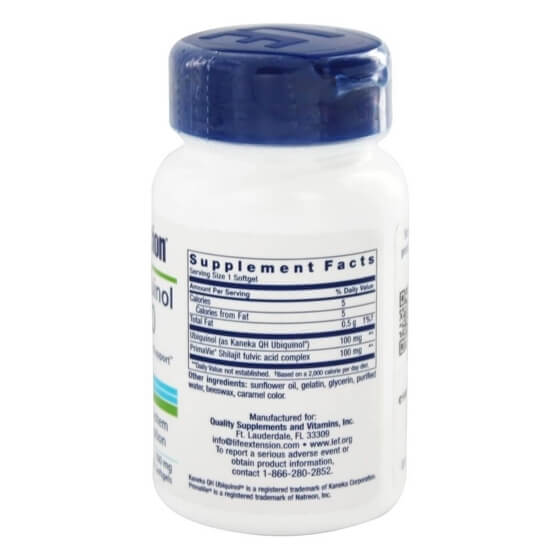 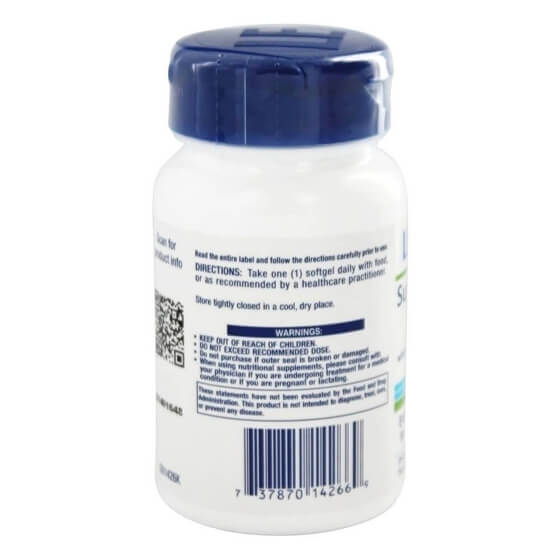 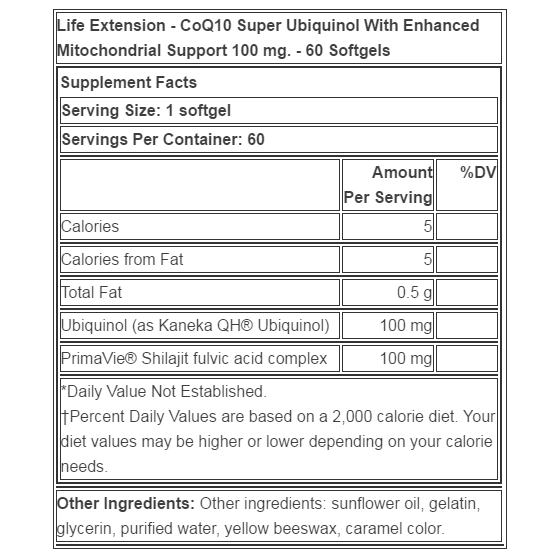 Benefits at a Glance

CoQ10 (or coenzyme Q10) is an essential nutrient your body requires for healthy mitochondrial function, a process that produces body energy at the cellular level. Because of this, it makes sense that CoQ10 is concentrated in high-energy organs such as your brain,2 liver, kidneys, and (most importantly) your heart.

As we age, CoQ10 levels in our body naturally decrease. What’s more, popular statin drugs which are used to lower cholesterol, can also deplete CoQ10 levels in the blood and potentially in tissue.

And while statins have been shown to reduce plasma CoQ10 by nearly 40%, the normal aging process may be even worse: reducing CoQ10 levels in the heart muscle wall by as much as 72%.

The traditional form of CoQ10, ubiquinone, is difficult for the body to absorb. But another form, ubiquinol, has been shown to absorb up to 8 times greater than ubiquinone. That’s why Life Extension offers a highly bioavailable form of Super Ubiquinol CoQ10 in a patented delivery system with superior absorption levels.

In middle-aged mice, ubiquinol was up to 40% more effective at slowing measurements of aging compared to ubiquinone. In another preliminary study in mice, the combination of CoQ10 and shilajit produced a 56% increase in cellular energy production in the brain — 40% better than CoQ10 alone. Muscle tissue saw a 144% increase, which was 27% better than with CoQ10 by itself.

Life Extension has consistently introduced more potent and better absorbed forms of coenzyme Q10 since the product first came on the market in the early 80s. The new Super Ubiquinol with Enhanced Mitochondrial Support contains an organic compound called Prima Vie™ shilajit that research has shown to double levels of CoQ10 in the mitochondria. Shilajit has been shown to help restore and sustain cellular energy. The latest studies reveal that when shilajit is combined with CoQ10, cellular energy gains substantially increase.

Researchers have found that shilajit works to boost CoQ10’s beneficial effects by:

Stabilizing CoQ10 in its superior ubiquinol form, thereby prolonging its action at the cellular level. Facilitating more efficient delivery of CoQ10 into the mitochondria, resulting in greater cellular energy output. Scientific analysis shows that shilajit itself is rich in essential compounds that promote mitochondrial metabolism. Part of shilajit’s beneficial effects derives from its ability to help the mitochondria convert fats and sugars into adenosine triphosphate, or ATP—the body’s main source of energy.

What are Life Extension’s quality control standards?
Life Extension uses only premium quality vitamins and other ingredients. Their dedication to excellence insists that their nutritional supplements meet the highest standards and criteria.

That is why Life Extension insists on purchasing only the highest quality raw materials from all over the world, primarily from leading US, Japanese and European sources. Life Extension goes one step further by using advanced analytical methods, such as high-performance liquid chromatography and gas chromatography/mass spectrometry, to ensure their products meet label claims for potency and purity. Life Extension tests its raw materials using US Pharmacopeia and other exacting pharmaceutical assay standards.

Why are Life Extension’s nutritional supplements more advanced than other dietary supplements?
The unique ingredients included in Life Extension’s products are often years ahead of the products sold by commercial vitamin companies. Life Extension scientists analyze thousands of scientific studies every week to make sure their health-promoting formulas include the most advanced life extending ingredients in the world. The Foundation interacts with the world’s foremost gerontology researchers in order to obtain inside information about antiaging breakthroughs before these findings are published. The Life Extension Foundation funds the most advanced anti-ischemia laboratory in the world, where antioxidant vitamins, hormones, and pharmaceutical agents are used to prevent free radical induced cellular damage.

Are Life Extension’s vitamins natural or synthetic?
Life Extension carries a combination of natural and synthetic vitamins and supplements. Some advertising statements would have them believe that “natural” is better, but natural supplements in some instances contain impurities such as pollen and naturally occurring hormones that can cause problems for some people. Synthetic nutrients are manufactured to be chemically identical (with the exception of vitamin E) to those extracted from natural sources, and are the most pure nutrient vitamins.

What does Life Extension do to ensure the quality of its products?
They focus on three specific areas.

Does the label accurately list exactly what’s in the bottle?
Yes. All active ingredients from patented, scientifically validated raw materials as well as final, finished products are verified using advanced analytical methods such as HPLC (highperformance liquid chromatography), MS (mass spectrometry), etc., to ensure each and every product accurately meets label claims in strict compliance with their demanding product specifications.

When it comes to supplements, is cost an indicator of quality?
Where Life Extension is concerned, yes. Patented materials validated in scientific studies cost more — period. In contrast with many commercial brands focused on driving up margins by using the cheapest raw materials available, Life Extension collaborates with raw material suppliers who invest in scientific validation of their ingredients, which increases material costs. With Life Extension products, you get the quality you pay for.

What are the “Other Ingredients” on the label, and why are they important?
They are inactive ingredients (excipients) that play a number of critical, essential roles in the manufacturing process including:

Why do some companies refer to these excipients as a threat to your health?
Claiming any product is “pure and free of excipients” can be deceptive advertising, too frequently used to draw attention away from inferior active ingredients! The right inactive ingredients used in the right way do important things … like ensuring that a tablet disintegrates in your GI tract rather than just passing through your system without benefit, or keeping a product from breaking down and being susceptible to microbes. Take Life Extension blueberry extract, for example. It contains AuroraBlue wild-harvested, Alaskan blueberries. To retain their nutritional complexity, these berries are freeze-dried and carefully milled for capsule formulation. But being a whole fruit raw material, it tends to want to reconstitute itself with moisture, which would make it a breeding ground for bacteria. So Life Extension uses a drying excipient to keep the milled blueberry material dry, so it can safely deliver its superior nutritional value compared with other, less costly blueberry extracts in most commercial formulations.

All of the excipients Life Extension uses have earned GRAS (“Generally Regarded As Safe”) status. In many cases not using them compromises final product quality! Excipients are used in nutritional supplements to ensure uniform density of complex active materials, to achieve even dispersion of active ingredients, and to promote appropriate disintegration and/or dissolution of active ingredients inside your body.

Should I be concerned with the usage of genetically modified plants (GMOs)?
Soybeans are an example of a crop that has used extensive genetic engineering to increase crop yield. The reality is that soybean oil and soy lecithin are highly processed derivatives of soy, far removed from their soy origin. Genetic modification doesn’t alter the entire plant, only a specific gene. Thus, specific molecules like soy lecithin are the same whether they come from a GMO or non-GMO soy source. However, due to their sensitivity to customer concerns, products with corn and soy-based active ingredients are in process of having the labels updated to list when soy and corn-derived active ingredients have been certified to be from non-GM food crops.

Why aren’t Life Extension products organic?
The word “organic” conveys the perception of quality to consumers. But it actually relates to foods that are grown rather than products that are formulated. Many of their scientifically validated raw materials are not produced organically. Rather, their mandate includes rigorous testing and scrupulous processing. The objective is purity, both in terms of our raw materials and their finished products.

Non-GMOPrimaVie® is a registered trademark of Natreon, Inc. Q+®, Kaneka Ubiquinol™, and the quality seal™ are registered or pending trademarks of Kaneka Corp. 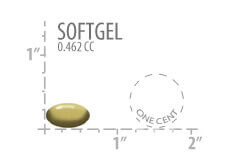 Take one (1) softgel daily with food, or as recommended by a healthcare practitioner.

KEEP OUT OF REACH OF CHILDREN DO NOT EXCEED RECOMMENDED DOSE Do not purchase if outer seal is broken or damaged. When using nutritional supplements, please consult with your physician if you are undergoing treatment for a medical condition or if you are pregnant or lactating. To report a serious adverse event or obtain product information, contact 1-866-280-2852.

The products and the claims made about specific products on or through this site have not been evaluated by Vitma.top or the United States Food and Drug Administration and are not approved to diagnose, treat, cure or prevent disease. The information provided on this site is for informational purposes only and is not intended as a substitute for advice from your physician or other health care professional or any information contained on or in any product label or packaging. You should not use the information on this site for diagnosis or treatment of any health problem or for prescription of any medication or other treatment. You should consult with a health care professional before starting any diet, exercise or supplementation program, before taking any medication, or if you have or suspect you might have a health problem.